OAKLAND, CA (August 24, 2021) — Civil rights law firm Haddad & Sherwin LLP announced today that it has filed a federal court lawsuit against high level administrators of the State of California and the CDCR for the COVID-19 death of San Quentin Sergeant Gilbert Polanco stemming from the botched transfer of 122 untested inmates from the California Institute for Men (CIM) to San Quentin on May 30, 2020. The California Office of the Inspector General wrote a scathing report about how prison officials’ conduct and decisions increased risk and placed both prison staff and inmates in great danger from COVID-19, leading to 29 deaths, including Sgt. Polanco. Cal-OSHA found state prison officials guilty of numerous serious workplace safety violations, many of them willful.

The claim is brought by Sgt. Polanco’s wife, Patricia Polanco, and two adult children, Vincent and Selena Polanco. This is believed to be the first such federal lawsuit against the State of California or its prison administrators for the COVID-related death of a State employee.

The lawsuit brings civil rights claims alleging violation of Sgt. Polanco’s constitutional rights, violation of the Americans with Disabilities Act (ADA), and Defendants’ negligent infliction of emotional distress on Sgt. Polanco’s wife and daughter. A copy of the Complaint filed today in United States District Court for the Northern District of California is available upon request.

Gilbert Polanco dedicated his life to what he called his San Quentin “family.” He was beloved by both co-workers and inmates, who were allowed to observe his memorial service by video feed. Sgt. Polanco was “an example of the best of CDCR,” according to former CDCR Secretary Ralph Diaz, who is also a Defendant in the case.

Michael Haddad, one of the family’s attorneys, says: “COVID-19 obviously has affected our entire society, but the San Quentin COVID disaster was entirely preventable. It was created by a culture of callousness in CDCR that led officials to subject to their own employees and the inmates in their care to greatly increased danger – much greater than what they would have faced had those officials followed basic public health mandates or simply done what everyone else was told to do. On behalf of Sergeant Polanco and his family, we will make sure that those officials and CDCR are held accountable.”

Julia Sherwin, another family attorney, says, “This disaster was the result of deliberate decisions made by people in charge who knew better, and who chose to break the law. The Defendants violated the most basic legal requirements like providing their employees N95 respirators. And they violated basic common sense like testing the Chino inmates before moving them to San Quentin and quarantining them from the rest of the population upon arrival. Patricia should have been planning to celebrate her 30th wedding anniversary with her soul mate, and instead had to plan his memorial service. She and her children will hold the State and every decision-maker in this debacle accountable.”

To interview attorneys Michael Haddad or Julia Sherwin of Haddad & Sherwin LLP, please call or email them as listed below.  The Polanco family requests that media not contact them directly.

The CDCR already has faced intense criticism for transferring those Chino prisoners from the California Institute for Men (CIM), all deemed high-risk for COVID-19, when many of them had not been tested for the virus for four weeks before they were transferred by busload to San Quentin. Up to the time of that transfer, San Quentin had not had a single case of COVID-19. Once those Chino prisoners arrived, CDCR and San Quentin officials failed to segregate them from the San Quentin population, and failed to protect San Quentin prisoners and staff from the virus they recklessly introduced. Those officials also failed to follow recommendations to control the outbreak from the Marin County Public Health Officer and other experts. (https://www.sfchronicle.com/crime/article/San-Quentin-officials-ignored-coronavirus-15476647.php). Within three weeks after that transfer, San Quentin had over 500 known cases of COVID-19, and eventually, most San Quentin prisoners and many staff contracted COVID-19.

The State of California Office of the Inspector General released a detailed report about this “Public Health Disaster at San Quentin.” https://www.latimes.com/california/story/2021-02-01/california-prisons-ignored-warnings-covid-outbreaks.

Assembly member Marc Levine, D-San Rafael, whose district includes San Quentin, has described this as “worst prison health screw up in state history,” concluding that “the spread of COVID-19 at state prisons was a preventable public health disaster and a failure of CDCR leadership at the highest level.” (https://www.sacbee.com/news/coronavirus/article243935832.html#:~:text=California%20lawmakers%20on%20Wednesday%20called,the%20state’s%20most%20explosive%20outbreak.). This civil rights lawsuit addresses that failure of California and CDCR leadership. 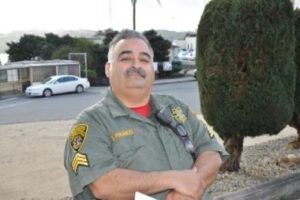 Gilbert Polanco was 55 years old at the time of his death from the COVID-19 Coronavirus on August 9, 2020. He was a Sergeant at San Quentin—where he began his career as a corrections officer at age 21—and a veteran of the United States Army. He was a beloved husband, father, co-worker, mentor, coach, peer counselor, and community servant. He was so beloved as a corrections officer that inmates at San Quentin collectively requested that his funeral be live-streamed throughout the prison. His family has been showered with letters of condolences and appreciation from current and former inmates; an affirmation of his lifelong passion to invest in others, particularly those who need it most. On the day Gilbert Polanco died, California Governor Gavin Newsom ordered that the Capitol flag be flown at half-staff. Gilbert Polanco’s funeral service included a motorcade of more than 200 cars, stretching over two miles long, and a 21-gun salute. Fittingly, parts of his ashes were scattered at San Quentin.