On Tuesday, November 10, 2020, San Francisco Chronicle reporter Rachel Swan informed me that back in March of this year, the San Francisco District Attorney, Chesa Boudin, had quietly dismissed the criminal cases against the Alameda County Sheriff’s deputies who brutalized our client, Stanislav Petrov, in November 2015, on video.

Deputies Luis Santamaria and Paul Wieber chased Stanislav across the Bay Bridge into San Francisco. Stanislav crashed his car and ran into an alley, then slowed down and began to put his hands up, and Santamaria and Wieber attacked him, severely beating him in the head with their batons. Hitting a person in the head with a baton is deadly force. The United States Constitution prohibits all law enforcement officers from using deadly force against any person unless he presents an immediate threat of death or serious bodily injury. Stanislav was unarmed, was no threat, and was in the process of surrendering when the deputies attacked him. As Stanislav tried to protect his head from the deadly force baton blows, the deputies crushed his hands. Then, as Stanislav was moaning in pain, Deputy Shawn Osborne stole Stanislav’s gold necklace and gave it to a homeless couple who had witnessed the beating. Osborne asked them, “Did you like the show?” and handed them the necklace, telling them “don’t spend it all in one place.” The couple later said they felt the necklace was given to them as “hush goodies.”

A local resident’s surveillance camera captured the beating and Osborne’s theft of the necklace. 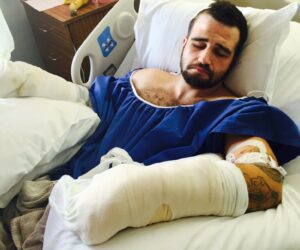 We filed a federal civil rights case for Stanislav, to hold the deputies responsible in civil court, and Alameda County paid Stanislav $5.5 million in damages. But the deputies still should have been criminally prosecuted.

It took the prior San Francisco District Attorney, George Gascon, six months to decide to bring criminal charges against Santamaria and Wieber. He never charged Osborne with any crime. Then the DA’s office let the case languish for years. I was shocked to learn that current DA Boudin decided to drop the criminal charges in March. This is the most slam-dunk criminal case against abusive police officers I have ever seen in 25 years.

I gave up trying to understand San Francisco politics years ago, but I thought the new DA was supposed to be progressive. Sweeping this case under the rug is not progressive. And it reeks of cowardice. The DA’s decision to drop this case quietly — during a pandemic, likely hoping nobody will notice —doesn’t just deny Stanislav justice for the brutal, life-threatening, and permanently disabling attack he suffered. It makes the rest of us, especially everyone in Communities of Color, and even other law enforcement officers, unsafe. Because it sends the message to the police that if you torture and brutalize people, if you wield deadly force against unarmed people who are just running away from you, you will not be held accountable. And it sends the message to the rest of us that police can be lawless cowboys and won’t be held to account for whatever they do, so we really shouldn’t trust them. That makes the jobs of police who are actually honorable a lot more difficult and unsafe.

Gross brutality like this, or like what happened to George Floyd, are not one-offs. There are almost a million law enforcement officers in the United States, and the vast majority of them are professionals who do their jobs honorably. We owe those officers our thanks. But Santamaria, Wieber, and Osborne were not honorable officers.

We see time and again that the officers who abuse people once tend to abuse people multiple times. The officers who killed George Floyd (the ones who were not rookies) had significant misconduct histories. Derek Chauvin, who so nonchalantly held his knee on George Floyd’s neck while calmly stuffing his hand in his pocket and smirking at the teenager who had the courage to record the incident, had 17 prior misconduct complaints.

When police officers break the law and seriously injure or kill people without justification, we absolutely have to hold them accountable. If we fail to do that, we send a deadly message to everyone, that police brutality and torture are OK in the USA.