Julia Sherwin is an acclaimed California civil rights attorney and Partner at Haddad & Sherwin LLP. Julia is an AV Preeminent Rated Lawyer who has successfully tried and settled many civil rights cases in federal and state courts. She began her career in Detroit, Michigan, at Goodman, Eden, Millender & Bedrosian, the first racially integrated law firm in the nation. Julia is listed as a Northern California Super Lawyer in San Francisco Magazine, in 2006 and every year since 2008. She has handled numerous cutting-edge wrongful death and serious injury cases, including for example:

Julia has also taught both lawyers and forensic pathologists, nationally and internationally, about restraint asphyxia and the junk science defense of “excited delirium,” including being an invited speaker at an international Death in Custody conference of physicians and forensic pathologists, where she spoke to 197 attendees from 27 countries.  She is one of five co-authors of the Physicians for Human Rights report on Excited Delirium, entitled “Excited Delirium” and Deaths in Police Custody:  the Deadly Impact of a Baseless Diagnosis. The report can be read here.

In the wake of the murder of George Floyd and worldwide protests against police misconduct, Julia founded Walls of Justice (@walls_of_justice), an online gallery of street art dedicated to social and racial justice and ending police misconduct.

Most of the CA civil rights law firm’s cases are wrongful death cases, and Julia Sherwin is honored and humbled to be able to represent clients whose lives were cut short by law enforcement or correctional healthcare corporations. She is deeply moved by each and every client’s human story, and strives to get to know her clients and their stories, to speak for them in the most compelling way possible in court. While law enforcement and jails may see her clients as “suspects” or “subjects” or “inmates,” Julia highlights each client’s humanity. She strongly agrees with Bryan Stevenson’s wise statement, “Each of us is more than the worst thing we’ve ever done.”

In every case, Julia looks for the systemic failures that contributed to her client’s injury or death, and whenever possible pursues significant reforms that will save other people from suffering as her clients were made to suffer. 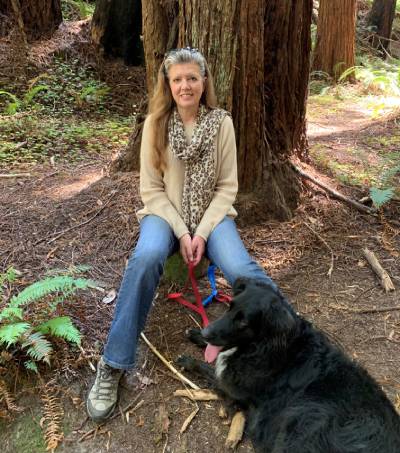 Personal: Lives in Oakland with her husband and law partner, Michael Haddad, and two rescue dogs, Kela and Luna. Loves spending time in redwood forests, hiking anywhere with Michael and their dogs, travel, writing, cooking when she has time, and helping people who have suffered injury, or the death of a loved one, at the hands of the government or corporations. Inspirations include Martin Luther King, Jr., Gandhi, Thurgood Marshall, and Nelson Mandela.